Exclusive: Jurgen Klopp on his 20 years in management

began his managerial career at short notice. “I was a player on a Sunday and a coach on Monday,” he recalls of his jump into the hot seat at Mainz.

That move, literally overnight, from player to manager at the club he later guided to Bundesliga promotion, arrived in February 2001 and thus began a journey that has seen him become one of the greatest football coaches of all time.

Klopp spent seven years at the Rhineland club, before another seven at Borussia Dortmund. And with this the 2021/22 season being his sixth at Liverpool, he is now in his twentieth year in football management.

This Is Anfield sat down to speak to the boss about his two decades as a manager, the highs, lows, advice and more.

Klopp was thrust into the job at Mainz, taking over the day before his first game in management and with the club struggling in the relegation zone.

“Be cool, everything will be fine!” would be his advice now for his 33-year-old self as he sits down to speak to us inside his new home of the AXA Training Centre in Kirkby.

“Nice isn’t it!” he says with his big, infectious smile. “The pitches are outstanding!

“That’s the one thing I would like if I had a time machine, go back and play the games I played with the balls, pitches and boots we have today because 20 to 25 years ago it was completely different and just have a look at how my football will have looked then.”

Klopp’s playing career was relatively modest, a striker-turned-defender with Mainz, but a fan favourite nonetheless due to his attitude and commitment. Such characteristics should have given us an insight into the type of manager and the kind of teams he would go on to produce. 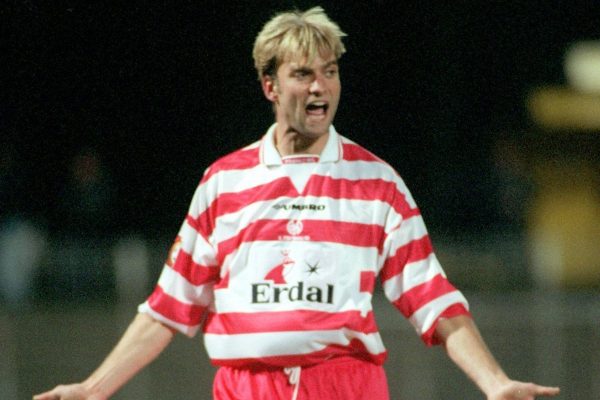 “I’m not sure it [the facilities] would have improved me a lot but a little bit at least,” he ponders.

Still, at the time that he moved into management, he was Mainz’s record goalscorer, so who knows how it may have worked out had he been playing in the modern era, training at the new £50 million complex that he and his Liverpool players now enjoy.

“We have the perfect circumstances here,” he assesses. “Kirkby will never be an excuse for any game we lose in the future. It is all fine – we just have to use it in the right way.”

Using things the ‘right way’ is something Klopp has successfully done throughout his time as a manager, getting the very best out of the squads at his three clubs, achieving a first-ever top-flight promotion with Mainz, back-to-back titles with Dortmund, and, of course, ending Liverpool’s 30-year title drought.

Klopp tells us how he always wanted to be a coach but expected it to be around three years later than when it did first happen – and even then, only for Mainz’s second team.

“That was the plan, to be involved in the coaching staff then,” he explains. “I still had a maybe two-year contract when I became a manager.”

After guiding the team to survival in Bundesliga 2., Klopp’s first two full seasons as manager saw his side narrowly miss out on promotion to the top-flight for the first time in the club’s history.

When it did arrive, in 2004, there was a huge party – one which Jurgen would love to have been in the stands for. “[It] was absolutely insane and it would probably be my second game I would watch again – because of the two years before we didn’t make it for one point, one goal and stuff like this so it was tricky.”

The number one game he’d love to go back in time to watch from the stands though is an easy option for the boss: “Barcelona, easy. I would love to watch this game from all different angles of the stadium, to be honest.

“I just don’t think anybody will see that again. It was so rare, so special the situation was so crazy difficult and the boys made it happen.”

Not many, if any, of a red persuasion are likely to disagree on that one. Mention the word ‘Barcelona’ near any Liverpool supporter and it now hits the same emotions as ‘St Etienne’ did for those who witnessed what was until that night in 2019, arguably, Anfield’s greatest night.

After Klopp’s side did what no other side in European Cup history did in 2019 and overturned a 3-0 first-leg deficit he told reporters post-match: “I said to the boys before the game, I don’t think it’s possible, but because it’s you I think we have a chance.”

Giving chances, believing in the individual, the team and the possibilities has been a theme throughout Klopp’s 20 years in management. He’s never been shy of making the hard decisions or giving a chance where others perhaps wouldn’t.

Everything went right for Liverpool on that night against Barcelona, but we ask Jurgen if there’s anything he’d look back now and do differently.

“One or two lineups,” he jokes with that trademark laugh of his. “Maybe before the game, I had a proper idea and after the game, I thought ‘No’! That could have been different!’”

After 20 seasons in management, his advice for himself when going into management would be “don’t worry” – which is something he carries into his everyday life. “Don’t take it [football] too seriously,” he says.

“I know it’s important to all of us but people make a massive fuss of football. So there are a lot of moments where I think ‘Come on, it’s still a game don’t forget that.’

“I know we get pushed in situations where it’s like managers get sacked and so many things happen in the world and in football so I think very often ‘calm down, don’t take it too seriously. It’s still a game.’”

Sage advice for every football supporter.

Klopp’s contract at Anfield is due to expire in 2024, meaning he would have been in charge of the Reds for almost nine years – his longest spell at one club and comfortably Liverpool’s longest-serving Premier League manager.

He has spoken openly of his desire to have a break from football – something he was doing in fact when gave him the call in October 2015.

We ask about his plans for life after football and his answer gives an insight into the intensity of being a manager of FC, comparing the two weeks after the season to the time after a sprinter finishes their race.

“Let me say it like this, when a season ends I lie behind the finishing line still deeply breathing after a 100-metre race for the first two weeks.

“You just lie on some sunbed, anywhere in the world for the first two or three weeks. And then you usually start already again.”

Klopp – somewhat ironically after his recent response to being the next James Bond and how ‘the world would switch off’ if he walked out of the water in swim shorts – is often pictured enjoying sunnier climes on his rare time off. 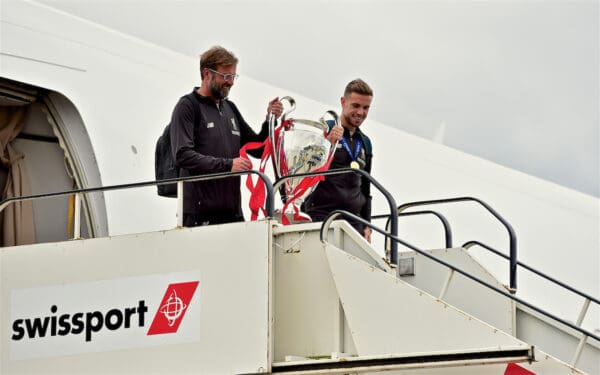 And it’s there that he wants to be when he does finally take a break from football. “Seeing the world, it’s [an] easy [answer],” he says. “I could see the whole world if I wanted but still, I have no time.

“I was a young father, an average player and it means for seeing the world I had no time and no money and then I became a manager and I had immediately had absolutely no time but a little bit more money.”

Klopp has consistently shown he isn’t afraid of the tough topics, often divisive ones ranging from Brexit to vaccines, and his outlook on life is one that is mirrored by so many. The man we see on our TV screens and the Anfield touchline every week is just like us. He wants to travel the world with his family and be happy.

When he said he was ‘normal one’ at his unveiling press conference, he wasn’t just speaking in football manager terms.

Thankfully, 2024 is still three years away, something Klopp is quick to point out, saying: “I still have three years left at Liverpool and that’s a long, long time in football.

“And I hope we are successful as possible in that time. I’m fully here, I’m full of energy and I want to go as far as possible and let’s see where we can end up.”

This interview is part of This Is Anfield’s 20-year celebration. You can watch the interview in full on our YouTube – and please remember to subscribe for more!

If you like what we do, consider becoming a premium member, which gives you access to an ad-free version of This Is Anfield and entry into exclusive competitions, including a signed Klopp shirt.

Thanks for your support!

END_OF_DOCUMENT_TOKEN_TO_BE_REPLACED

There was a lot to digest for Jurgen Klopp after Liverpool’s rollercoaster 3-2 victory at Atletico Madrid, but the key was that a ...