Nat Phillips made his first Liverpool start since May as Barry Lewtas’ under-21s side were defeated 4-1 by Bolton Wanderers in the EFL Trophy.

Liverpool battled well in the opening exchanges of the Group B clash, led by the experience of Phillips, limiting the League One outfit to just a handful of half-chances.

Phillips, an allowed ‘over-age’ player was donning the armband for the young Reds on the night as he picked up his maiden minutes of the season.

His quality, though, was obvious from the get-go as he looked to target Bolton’s high-line with low, driven balls from deep to Elijah Dixon-Bonner, who was debuting a new position as a No.10.

Lewtas appeared to go with a diamond formation on the night as he looked to deal with the absence, due to international commitments, of some of his more experienced players in the most efficient way possible.

The young Reds found themselves a goal down just before the half-hour mark as Football League journeyman Nathan Delfouneso nodded past Marcelo Pitluga from close range at the near post.

At this level, especially in this type of competition, there is often not too much of a disparity between all 22 players when it comes to playing quality.

However, as Lewtas and his young Reds have found out during their three seasons in the competition, it’s very much the experience and the durability of the Football League sides that get them over the line. 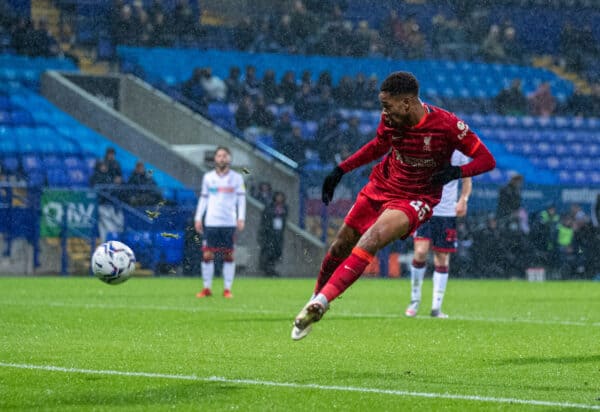 Similar to last time the Reds played in this competition, a 4-0 defeat to Rochdale, Liverpool would have been more than deserved of at least share of the spoilers but a rampant second-half showing from the Dale,

And Ian Evatt’s side appeared to follow that exact blueprint as second-half goals from Amadou Bakayoko and an own goal from Jarell Quansah put the game beyond any doubt shortly after the interval.

Dixon-Bonner did pull a more than merited goal back for the young Reds after some fantastic footwork earned him a yard of space in the box to slam past Gilks, but the home side would ultimately have the final say as Marcelo Pitaluga couldn’t keep out Bakayoko’s penalty.

Plenty of eyebrows were raised when the team news trickled through that Bolton-born Phillips would be making his first start of the season.

For a man who was the subject of plenty of summer speculation, it would not have been how he would have envisioned his first Reds appearance of the season.

With Virgil van Dijk and Joe Gomez both returning from long-term injuries this season, combined with the addition of Ibrahima Konate, and Joel Matip’s immaculate recent form, the 24-year-old has found opportunities hard to come by this season.

Surprisingly, or unsurprisingly given the quality the Klopp now boasts in a possession that would have given him plenty of sleepless nights last campaign, Phillips wasn’t even required during the Reds’ recent League Cup win at Norwich.

Looking assured and confident on the night, he showed his quality on the ball as he constantly looked to pick out the midfield opportunist’s looking to break beyond the Whites’ high-line.

He also displayed plenty of fundamental qualities that helped enhance his reputation during his stint in the senior side as he threw himself in the way of Josh Sheehan’s effort on the edge of the box.

This appearance probably generates more questions than it does answers for Phillips and his future at Anfield.

Having just signed a new four-year deal at the end of August it remains to be seen where the defender will be predominantly featuring for the remainder of the campaign.

With the early signs suggesting that his decision to stay on Merseyside after his league heroics just months ago was a decision sanctioned on emotion rather than logic for both player and club. 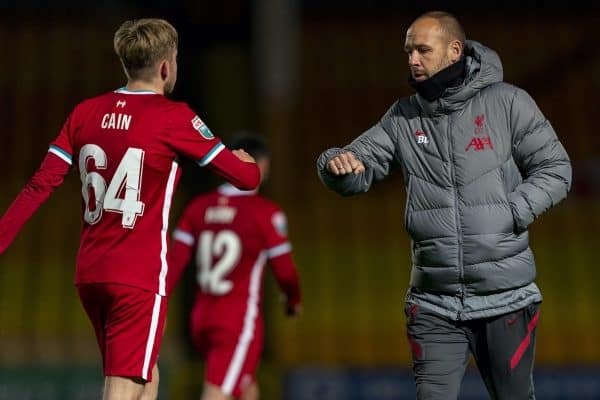 Tasked with overturning the League One side without the likes of James Balgizi, Kaide Gordon, Mateusz Musialowski, Conor Bradley and Owen Beck, Lewtas opted for a slight tactical change from the usual 4-3-3 that is on display at Kirkby.

The young Reds lined up in a 4-1-2-1-2 formation as Jack Bearne and Max Woltman were tasked with stretching the Bolton line in the hope of presenting Dixon-Bonner and co with space to operate in between the lines.

Dixon-Bonner, who had a taste of Football League action earlier in the year as he spent the summer on trial with Portsmouth, was the game’s early bright spark as he dropped deep to get on the ball and play some crafty line-breaking passes which Lewtas’ side failed to maximise.

The home side opted to get the ball on the ground for most of the contest which allowed the young Reds to bring the contest to them, with Tyler Morton and Isaac Mabaya enjoying the midfield battle.

It remains to be seen whether the formation is something Lewtas chooses to pursue over imminent weeks and months, but it is certainly another string to the bow of all of the youngsters involved tonight.

The effect of three winless seasons? 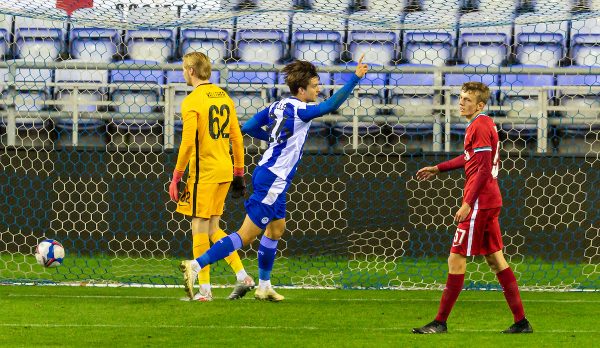 This is the third season in which Liverpool have opted to enter the competition, with the side remaining winless and only managing to score a handful of goals.

However, the effect of the competition is clear for everyone to see, just ask Harvey Elliott, Curtis Jones and Rhys Williams who have all played some part in the competition under ex-boss Neil Critchley or Lewtas.

It’s an invaluable experience that plenty can take from, learning lessons the Premier League 2 is too kind to teach young footballers.

Typically, the league sides look to bully and intimidate the adolescent teens who appear to have the world at their feet at some of Europe’s best footballing institutions, with physical development being the great difference between most sides as Bolton, like Rochdale, gave Lewtas’ men an undeserved second-half hiding.

TIA Man of the Match: Dixon-Bonner

Liverpool fans have witnessed many a great forward in the Premier League era, with Mohamed Salah only the most ...

END_OF_DOCUMENT_TOKEN_TO_BE_REPLACED

The UEFA Youth League is always an interesting sideshow before a big Champions League night. During the group s...

END_OF_DOCUMENT_TOKEN_TO_BE_REPLACED

Tonight’s game with Atletico Madrid will be a big test for Liverpool, but the big one is Manchester United on S...

END_OF_DOCUMENT_TOKEN_TO_BE_REPLACED

Not every player that comes through the Liverpool academy can make it to the first team and stay there. While t...

END_OF_DOCUMENT_TOKEN_TO_BE_REPLACED

10 key things to know ahead of Atletico vs. Liverpool

Liverpool face a tough trip to Atletico Madrid on Tuesday evening, looking to avenge their Champions League elimination back in 20...

END_OF_DOCUMENT_TOKEN_TO_BE_REPLACED

Klopp says he ‘prefers a different kind of football’ to Simeone

Liverpool defender Virgil van Dijk knows he is being closely watched to see how well he has recovered from knee surgery but feels ...

END_OF_DOCUMENT_TOKEN_TO_BE_REPLACED

There was more disappointing Liverpool team news on Monday, as Jurgen Klopp‘s side prepare to visit Atletico Madrid in the Champio...

END_OF_DOCUMENT_TOKEN_TO_BE_REPLACED

2 Liverpool lineups with Firmino or Jota call to make

END_OF_DOCUMENT_TOKEN_TO_BE_REPLACED

Jurgen Klopp says he has "no idea" if Mohamed Salah has done enough to win the 2021 Ballon d'Or award. But the ...

END_OF_DOCUMENT_TOKEN_TO_BE_REPLACED

The Premier League fixture dates for the festive period have been confirmed, with Liverpool to host Leeds in the lunchtime kickoff...