The below were my five key takeaways from our 1-0 Premier League loss against Man  City on 25 September 2021.

However in this game, it was a case of the team that wanted it more got it. The visitors started the game with the ferociousness and intensity of a side that was determined to prove a point – they were still the best team in the country and everyone should respect them.

Too often Guardiola’s Citizens have been praised for their silky style of play but questioned over their ability to dig deep and physically outwork their opponents when needed.

In this game, they found a perfect combination of both playing good football with the ball, and equally importantly, without it. From back to front, start to finish, their press and counter pressing was relentless.

While the players were the soldiers out on the battlefield deploying the strategy, praise should equally be given to the General for developing the right strategy and motivating his troops.

In the past three occasions before the latest instalment, Tuchel had managed to outclass and outfox one of the game’s most distinguished managers. However in this particular outing, Guardiola had seemingly done his homework on suppressing Tuchel’s Blues and found a way to suffocate Chelsea and beat them into submission as the home side struggled to gain any rhythm or ascendancy.

Although the performance was indicative of the Blues lacking the necessary conviction to play their natural game, credit must also be given to City who were super motivated and part of that comes down to the master tactician.

Tuchel’s honest assessment post game that his approach could have been improved or his team selections might have been different gives us confidence that this will be an anomaly. Here’s hoping!

It’s no secret that the rising superstar Mason Mount has not yet recaptured the dizzying heights that he reached last season – including his inch-perfect pass for Havertz to score the winning goal against Manchester City in the Champions League final.

That said, his contribution to the team is always positive, whether it be in an attacking or defensive sense. His ability to use his seemingly endless energy to press Chelsea’s opponents sets the platform for his team mates to win the ball back and restart the attack.

Speaking of attack, his versatility is also invaluable to Tuchel’s setup as he has been used in a variety of positions, predominantly in forward positions but he also finds himself quite often dropping deeper to offer an extra presence in the middle where we may be overrun.

Make no mistake, a Chelsea side with Mason Mount in it is a much stronger one. Had he been playing, the general ebb and flow would have been different and hence Chelsea’s chances of obtaining a better outcome would have been significantly increased.

While City dominated possession and territory, and looked the likelier of the two teams to open the scoring, Chelsea’s defensive shape and organisation was working reasonably well.

In the second half, the Blues uncharacteristically switched off at a short corner and as the ball fell to Jesus inside the penalty area following a blocked shot from Cancelo, the surrounding Chelsea players were not quite sharp enough to stop Jesus from shooting and his shot deflected off Jorginho into the goal beyond a helpless Mendy.

From that point onward, and with Chelsea making tweaks to their midfield in order to find an equaliser, they were more exposed to City who were strategically waiting for counter-attacking opportunities. On a few occasions Mendy made some outstanding saves to deny Grealish, and also Silva made a goal-line clearance to keep Jesus from getting a brace.

On another day, City could have scored another 2-3 goals and really dented the confidence of the Blues but thankfully the individual and collective brilliance of the Blues defence kept the scoreline respectable.

There weren’t too many positives to take away from that very passive and underwhelming performance.

However, the introduction of the silky and smooth Ruben Loftus-Cheek in the 76th minute left a lasting, positive impression.

Every time Ruben received the ball, he either glided past his marker or simply out-muscled them, he linked up with his team mates well, and he was cool, calm and composed under pressure from an ever-present City press. 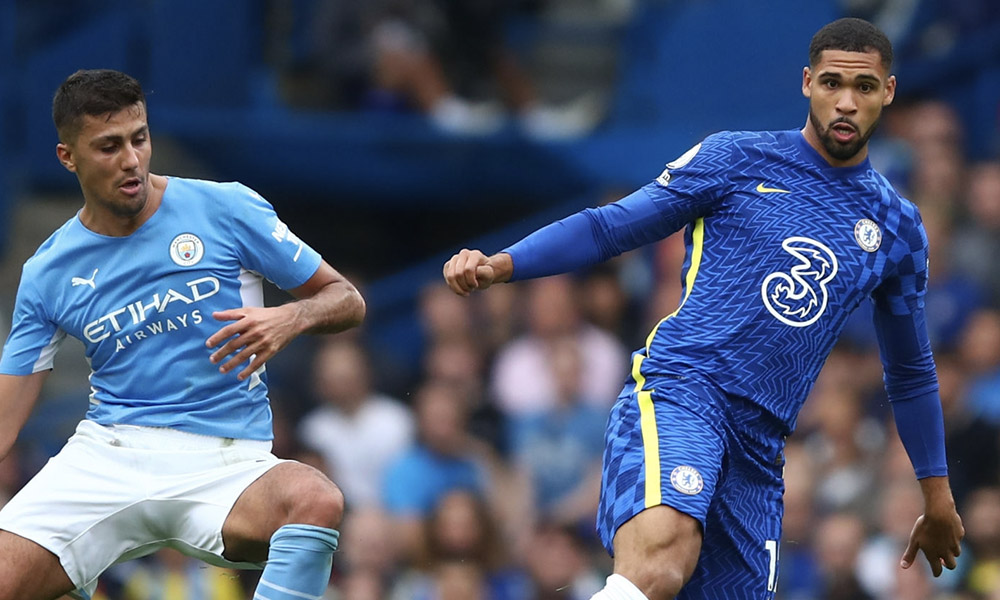 He also made some good driving runs and while he didn’t generate any direct goal-scoring opportunities, he certainly lifted the spirits of those within Stamford Bridge and the millions of Blues watching around the world.

Given he was a peripheral figure at best at the start of the campaign, seeing his progress and momentum is very exciting. Chelsea fans will be urging Ruben to keep his head down and continue to take his chances when given them.

His story might not be closed with the Blues after all!

It was the clash of the titans and a preview of the current champions vs those that harbour that ambition. Or at least that’s what we were hoping. In reality what transpired was a dominant display from the nation’s best against a side that were playing with a 3 point safety net and who had the long game in mind.

Disappointingly for Blues fans this game seemed to be over before it started as the home side lacked any real belief that they could win this match as their mantra seemed to be more about not conceding rather than pursuing the win.

In the end, their over prioritisation of being pragmatic and conservative was their downfall as it allowed City to impose their natural style rather than challenge their comfort zone.

Perhaps the key thing to takeaway from this performance from a thematic perspective was that, what worked against one opponent won’t necessarily work on another. In other words, the highly-effective 3-5-2 against Spurs did not seem to have the same impact against City.

While that’s a very rudimentary assessment, it does hold some merit as the key principles of it were true in the sense that the three central midfielders used are not known for their attacking prowess and at times struggled to link-up with a very isolated front two.

That said, the individual performances of the players selected did not help the cause either. Therefore it was a combination of factors that led to a substandard display overall.

Fortunately this is a one-off result at a very early stage in the season against a top-quality opponent (the reigning Premier League champions). And, gven the fact that the Blues started off the season brightly to put themselves in a good position to be able to afford the occasional blip, there’s no need for panic stations just yet. However, Tuchel will be mindful that the Blues will need to improve their starts to games so as to avoid leaving it too late to try and secure wins.

Let’s hope this performance was an anomaly and that Chelsea learn from this experience.

Perhaps this was a blessing in disguise? Time will tell!

Juventus next, Southampton thereafter and then another international break. Two wins from here ensures we re-establish our winning momentum and keeps everyone in good spirits.

Come on you Blues!

END_OF_DOCUMENT_TOKEN_TO_BE_REPLACED

A new candidate has joined the hunt for a German hotshot linked with Liverpool and Chelsea, though they think the race may have alre...

END_OF_DOCUMENT_TOKEN_TO_BE_REPLACED

Manchester United's 5-0 home defeat to Liverpool appeared to have been a little bit too much for Rio Ferdinand, who was taken to hos...

END_OF_DOCUMENT_TOKEN_TO_BE_REPLACED

Liverpool breezed past an abysmal Man United team, displaying the gulf in class, quality and organisation between the two teams cu...

END_OF_DOCUMENT_TOKEN_TO_BE_REPLACED

Arsenal didn’t play like they needed to play when Crystal Palace came across town on matchweek seven, and despite getting out ahead...

END_OF_DOCUMENT_TOKEN_TO_BE_REPLACED

Manchester City defeated Brighton and Hove Albion over the weekend in what was a routine victory for the Sky Blues. What was most s...

END_OF_DOCUMENT_TOKEN_TO_BE_REPLACED

Chelsea: A brief history of blowouts in the Premier League

Norwich was decidedly not ready for Chelsea. Mind, Norwich hasn’t really been ready for anyone this season but once the flood gate ...